I recently had another look at a short story I'd written a couple of years ago about a man who claimed to be a Time Lord.

I noticed a typo.  Before I knew it I had added a new section and a new character and given him an experience I actually had as a child.

The ball went over the boundary for six - no fence in those days - and into the bush.  My friend Wesley and I went after it with the other searchers but we just kept going down into Lorna Pass.

After a while we reached the creek. 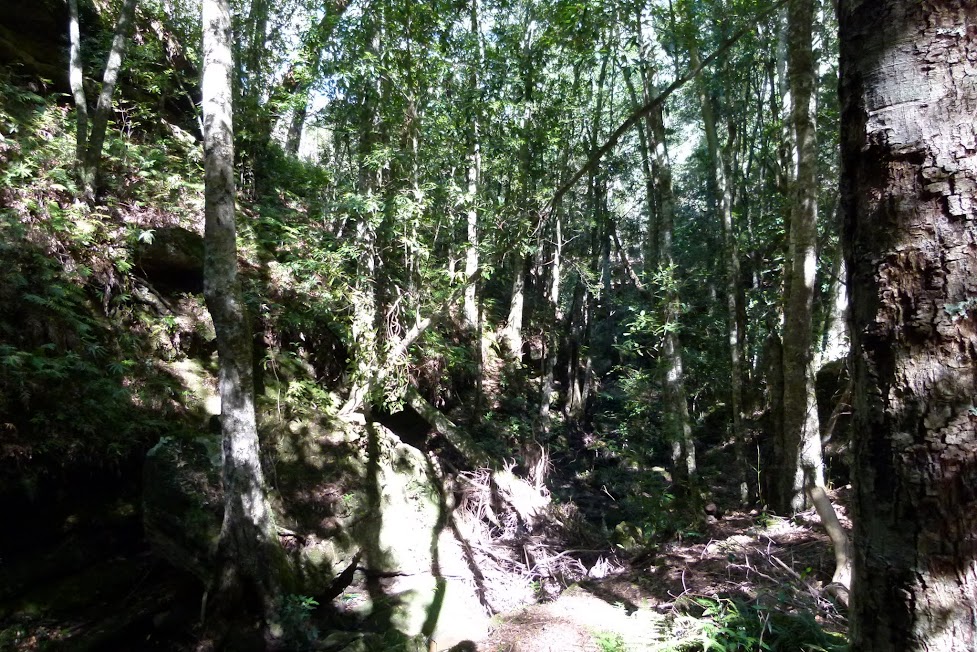 'Down the Creek' - this is near a different creek

The creek is a headwater of the Lane Cove River and we started throwing rocks into the water. The bigger the better.  One of them was too big and instead of making a bigger splash with it I cracked it open to create some smaller pieces and there was a fossil.

I was excited by the find and wondered how long it had been there before I found it - maybe millions of years.  Was it shale or sandstone I'm no longer sure. But it was wonderful and amazing!  A prehistoric plant had been there all that time, until I opened the rock and found it. Proof of the Earth's great age.

I was dumbfounded.  Evolution was a true to me as the existence of Newcastle on the other side of the world - something I had known about and believed in all my life.

It was the first time I had encountered someone, a good friend, who had an entirely contrary view of reality - who lived in a different universe.

He had been brought up in the Church of the Nazarene.  They had a large college building and occupied a group of houses on Pennant Hills Road across the road from Thornleigh Public School.

I too was brought up a sort of Christian.  My father had told me that the Bible provided our 'moral compass' and that Jesus had been a very good man who people followed for that reason.  I went to Church of England scripture classes at school and was sent to Methodist Sunday School, another story, so I was quite familiar with parables.   My parents had encouraged me to think of the entire Bible as a series of parables - intended for moral guidance.  Stories, like the Garden of Eden and Noah and the Arc, were obviously not real events, they were no more true than the parable of The Good Samaritan, that we dwelt on in scripture class.

It came down to believing a strict Biblical account of reality or believing that the Earth was several billions of years old.  Wesley was firmly on one side of the fence and I was firmly on the other.  We discussed it at length.  It was perhaps my first philosophical argument.

So I've now used the scene in my short story with second, fictional, boy added to make a further point.  Since then I've found fossils in many places, particularly in slate/shale and coal on several continents, the last being on Sun Island in the middle of Lake Titicaca in Bolivia. The wonder never goes away so I couldn't resist having more boys enjoy the discovery and in my precocious character correctly estimating their real age - over 300 million years.

Today, thinking back, we gave no thought to the original human inhabitants of this valley millions of years later or to their religion and creation myths.  We knew nothing of their tribe or their culture except what we learned in 'Social Studies' about eating snakes and witchetty grubs (that we had occasionally dug-up ourselves but never had the courage to eat) or making bark shelters, spears, woomeras, didgeridoos and boomerangs (that we emulated) or starting fires with sticks (harder than it looks, although fruit-box-wood, or the edge of a wooden rule rubbed hard on the side of a school desk, works quite well).

Our awareness of the past went back as far as the convicts, early settlers and bushrangers.

There was once a cobbled road through that part of the bush and sections of cobble could still be seen.  We thought it was convict built.  As I have mentioned elsewhere swaggies still occasionally inhabited the place.  But not so 'jolly' as in 'Waltzing Matilda'.  "Stay away from them!" we were warned.

Thornleigh takes its name from police Constable John Thorn who was granted land in the area for his role in capturing a gang of bushrangers around here.

We shared all kinds of imaginative stories concerning bushrangers in this bush and it was their magic that pervaded the place and gave it its mystery and excitement.

We were sure that Leigh was the name of the bushranger Constable Thorn caught.   But disappointingly I later discovered that 'leigh' is simply the old English word for a meadow. It's something I realise I've long known but must have learned later.   Joan Rowland's history of the suburbs also mentions his fellow Constable, Samuel Horne, who was granted land at Hornsby.

Further, Lorna Pass takes its name not from a bushranger's moll, or victim, but from respectable Lorna Brand who raised money during the Great Depression to create work by building a walking track there.  So that probably accounts for the cobbled road and sandstone crossing as well.

Today, much of that once magical area has been touched by development.  At intervals along the opposite ridge, like missing teeth in the smile of green, suburban Wahroongan houses peer down into the valley.  Further up-stream a new highway cuts across and down stream a railway tunnels beneath.

When I returned a couple of decades ago to rediscover my past I realised that in the cold light of adulthood the magic had entirely evaporated.

I realised that magic lies richest in childish innocence, wonder, mystery and imaginings.

That part of my childhood had gone.

I haven't been back.