I have reached a point in my life when the death of a valued colleague seems to be a monthly occurrence.  I remember my parents saying the same thing.

We go thought phases.  First it is the arrival of adulthood when all one's friends are reaching 21 or 18, as the case may be.  Then they are all getting married.  Then the babies arrive.  Then it is our children's turn and we see them entering the same cycle.  And now the Grim Reaper appears regularly.

As I have repeatedly affirmed elsewhere on this website, each of us has a profound impact on the future.  Often without our awareness or deliberate choice, we are by commission or omission, continuously taking actions that change our life's path and therefore the lives of others.  Thus our every decision has an impact on the very existence of those yet to be born.

In due course, your influence over the future constitution of humanity extends to the existence of all living things:  the whole of nature.  This is not limited, as you might imagine, to:  burning-off; hiring a pest exterminator; buying a leg of lamb; or to those seeds you may or may not have successfully planted.  Did they survive?  Are the packets still in the cupboard or still unpurchased?

Often the cultural influence of people who seem to be just going about a humdrum existence is ultimately just as influential as those who seem to have more power, like a President or Prime Minister.

Many of my unsung colleagues influenced the decisions of those in apparent power or contributed to the deeper workings of government, including the actual application of resources to achieve outcomes.

Now one-by-one their lights are going out and, we remaining, feel the loss of each light's illumination:  their knowledge; experiences;  humour; different ways of seeing the world; their unique insights.

Some people are committed to deliberately changing the future by uncovering the reality that underlies our immediate sensations and perceptions: Science.

Among the tens of thousands who work conscientiously at science are the handful who are the right person, in the right place, at the right time, to make a major breakthrough.  A breakthrough that changes the world in more profound ways, by changing our entire understanding of our universe.  Newton and Einstein are obvious examples.

Last week on on 19 November 2013 a man who described himself  as "just a chap who messed about in a lab" and "academically not brilliant" died at the age of 95.

Frederick Sanger was only person to win the Nobel Prize for Chemistry twice.

Having initially struggled through an undergraduate degree, Sanger went on to take a PhD at Cambridge, looking at the structure of insulin that he initially purchased at the local chemist shop. Through some very innovative laboratory work he developed new techniques for analysing proteins and quite quickly made some important discoveries.  In particular, he showed that the sequence of amino acids in the two polypeptide chains of insulin define the insulin protein.  The realisation that every protein has a unique sequence was crucial to Francis Crick's hypothesis as to how deoxyribonucleic acid (DNA) codes for proteins; and the subsequent discovery of the 'double helix' structure of DNA.  This is, of course, fundamental to our recent understanding of reproduction and life itself.   Hence his first Nobel Prize in 1958.

Now a prestigious scientist and the leader of a research team, Sanger continued to prefer the laboratory to the desk.  In 1977 his team developed the Sanger Method, a chain-termination method of accurately sequencing long stretches of DNA.  This led to the first genome sequencing and to modern genomic mapping.   Hence his second Nobel prize in Chemistry in 1980.

According to all reports, Sanger was a humble man, after whom the The Sanger Institute, Britain's leading, and one of the world's largest genomic research centres, is named but who refused a knighthood on the grounds that they made one different.  Maybe this was a result of his Quaker upbringing?   As he told The (London) Times in 2000: "I was brought up as a Quaker, and for them truth is very important. I drifted away from those beliefs – one is obviously looking for truth, but one needs some evidence for it. Even if I wanted to believe in God I would find it very difficult."

There were no headlines in Australia when he died.

Our newspapers and magazines spend litres of ink on the death of an actor, a singer, or a sportsperson and that's fair enough, they are often well known by repute.  Public figures, like Princess Diana or some actress, often seem like a family member to those who follow celebrities more closely than they do their own relatives or their actual friends. 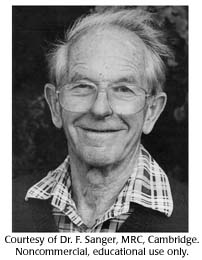 But in terms of his impact on the future, Frederick Sanger's influence will be vast, compared to the contributions of those who publicly pontificated or danced or sang or swam or ran.  It will extend even to the seeds in the packet.