His life in a can

"She’s put out a beer for me!   That’s so thoughtful!"  He feels shamed, just when he was thinking she takes him for granted.

He’s been slaving away out here all morning in the sweltering heat, cutting-back this enormous bloody bougainvillea that she keeps nagging him about.  It’s green waste tomorrow and he’s taken the day off, from the monotony of his daily commute to a job that he has long since mastered, to get this done.

He’s bleeding where the thorns have torn at his shirtless torso.  His sweat makes pink runnels in the grey dust that is thick on his office pale skin.  The scratches sting as the salty rivulets reach them and he’s not sure that he hasn’t had too much sun.  He knows he’ll be sore in the office tomorrow.

"That’s so nice; she’s chilled the can in the freezer first and put it in the shade on the garden bench – really thoughtful."

“Oh, my aching back!” he exclaims to no one in particular.  It’s great to sit here in the shade for a moment in his garden, his one real hobby and joy, enveloped in the summer scents of roses and jasmine, as he enjoys an ice-cold beer.

“This is just what I need,” he sighs listening to the birds in the trees overhead and the distant buzz of a lawnmower.  It’s a soothing break before he attempts to cut and bundle these vicious branches - more scratches and heavy lifting coming up.

“Ah this beer’s good!” he says satisfied.  It clears away the dust.  He likes to say that’s what a cold beer is best at – washing away dust and bitterness. 'Existential detritus' he calls it.

"You know”, he thinks, "this is the most thoughtful thing she has done for me in I don’t know how long."

Generally he feels taken for granted.  He's a good breadwinner he goes to work, comes home, fixes things around the house, puts out the garbage, packs the dishwasher, washes and irons his own shirts, keeps the money coming in – but it’s all just expected – no thanks required or given.

Then suddenly she does something like this: this wonderful, thoughtful beer.

To be fair he doesn’t always acknowledge the things she does either, between her commitments to the tennis club and gym.  She does keep in shape for him. Sexy.

"I’ll get her some flowers this afternoon,” he thinks, reviewing the scattered blossom from this morning’s efforts. 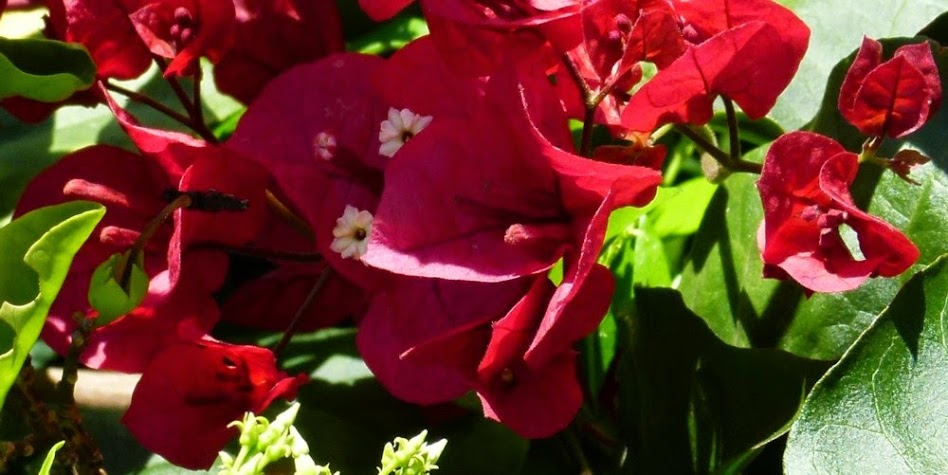 But this beer makes up for so much.  It says: "I do appreciate you even though I don’t always tell you so.”

He’s in love with her all over again - and in lust.  "I'll do that something special she likes for her tonight."

Now he can attack those bloody thorns revitalised.

When she went out early he wasn’t even sure that she knew he was doing this today; though she’s been going on about cutting back the out-of-control bougainvillea for weeks.

“I’ve done a great job.  The garden looks great.  Even if I do say so myself.”  He pronounces to the re-ordered garden at large.

Three big neat bundles bound up in natural twine to Council specification and a pile of fallen scarlet blossom, leaves and dust swept away to the bin and hosed down.

“God I stink!” he declares happily. Proof of hard labour. “Time for a shower.”

“Ahh, this’ great!”  Soaping up under the soothing water he feels like singing: “I’m singing in the rain, just…”

But what's this?  As the shower screen glass mists-up at chest height are the faint remains of something scrawled large in some earlier fog.   ...  H..der!  A message to the cleaners?

Wham!  The bathroom door has slammed open.  “You selfish bastard!” she’s screaming at him.  “Did you drink Jim’s beer?”  She’s beside herself with fury.

“Jim my friend who’s helping me move the table I bought this morning.  You drank his beer you prick!”

“You’re giving some bloke a beer for moving your table?  Why not ask me?  What else does he do for you?”

“Why would you care?” she shouts - but now he detects an edge of defensiveness - and she's performing - for a double audience?

He hears a movement. Jim is lurking somewhere back there.  In the bedroom?

“Is he a good fuck?”  He finds himself demanding, in an appalling epiphany.

“Much better than you!” she yells incautiously, partly for her lover's benefit.

Naked and wet, he pushes past her out of the bathroom and storms through the house out to the garden bench.  Snatching up the bitter can he throws it down on the ground and crushes it with his bare foot.

The front door slams behind him as she leaves the house with the unseen Jim.

In the midday heat his instep and heel spurt ominously to the beat of his heart.   A sticky bougainvillea-red puddle blossoms out across the lawn in vivid contrast to the jade-green grass.

Looking down in horror at his sliced open foot he feels chill.  He's about to faint.  The colourful scene turns grey as he falls headlong into the golden roses slamming his head hard onto the stone border.

Now all is black and soundless.

His naked body, half sunburnt and scratched, half ghostly pale, still glistening from the shower, lies unconscious in a golden field of scattered rose petals.  The heady perfume of the flowers is tinged with the metallic scent of blood.

The scarlet ponds at its feet and head spread, then darken and grow no more.

The razor sharp sides of the torn can glisten in the unrelenting sun.

In the distance the mower is mowing again.

From a house nearby the sound of a choir is wafting on the breeze.  Mozart.  The Requiem.