The Chimera of Clean Coal 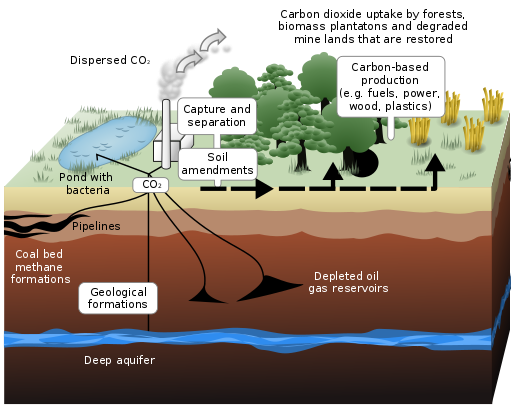 Whenever the prospect of increased carbon consumption is debated someone is sure to hold out the imminent availability of Clean Coal Technology; always just a few years away.

I have discussed this at length in the article Carbon Sequestration (Carbon Capture and Storage) on this website.

In that detailed analysis I dismissed CCS as a realistic solution to reducing carbon dioxide emissions for the following reasons:

Here I use as an example the case of NSW Australia, for which I have current numbers in 2010.  But the same realities apply at any time, anywhere in the world.

Around 70 Mt of black coal is consumed in NSW annually.  Major consumers are power stations, (85%), the steel industry  (6.5%) and the cement industry (1.6%). Other industry consumes the remainder.

Australian exports have a far greater impact on global emissions than those at home.  Australia exported 274Mt of coal in 2009, comprising 135Mt metallurgical and 139Mt thermal coal, accounting for approximately one third of global coal exports. At current growth rates this is expected to exceed 390Mt by 2015.

In addition to coal, every tonne of iron ore exported requires around 0.4 tonne of coal to be consumed (mainly in Asia) in its initial reduction to metal.  Similar or greater quantities of carbon are employed directly or indirectly in the reduction of most other metals from their ore.

Disposing of less than one percent of the world's carbon dioxide (CO2), just that produced in NSW, sounds pretty manageable doesn't it?  But let's put some numbers around this.

The coal burnt annually in NSW presently converts to around 200 Mt of CO2 (you can see how this is calculated in the extended paper).

So far this is just a number... so what does this mean in physical terms?

As a gas this is the vast volume; many trillions of cubic metres.  This is what presently 'goes up the stack' to threaten the climate.  So to store it it needs to be 'captured' and compressed into a liquid or solid.

Separating the gas from the flue requires some less well proven technology but CO2 cooling and compression is an everyday, well understood, industrial activity.

200 Mt of CO2 compresses to around 170,000 megalitres of liquid CO2.  Its weight and volume is far higher than that of the coal that went to producing it.  Transport to the storage site will be correspondingly far more difficult and costly.

To get a feel for this annual accumulation, it is the volume of about ten Guthega Dams, familiar to those who ski there;

or about a third of the volume of Sydney's annual water consumption.  But unlike water, this liquid must be kept at a high pressure otherwise it will become solid; dry ice.

I hope you are now imagining a lot of pipes - some very large and possibly very long.

The water supply pipes in this image are leaking, as they do from time-to-time, but CO2 needs to be pumped at around five times this pressure and must never leak.

If all this CO2 could, very optimistically, be injected into deep geological strata, to an interstitial equivalent depth of one metre, the liquid would underlie and area of 170 square kilometres; after just one year of operation. In less than a decade an area larger than the greater Sydney metropolitan area would be underlain by liquid CO2 that may remain in that state for thousands of years.

Conservatively, this process would consume between a quarter to half of the energy generated by a power station employing the technology; and more than double the generator's capital cost.

The actual difficulties in injecting the liquid underground are not fully explored.  The technology is already in use in almost depleted oil basins on a very small scale; but it is not clear what other strata may be suitable.

Carbon dioxide and the economy

Of course coal is not the only fossil fuel that produces CO2.  Petroleum and gas together produce more CO2 but the points of release, homes vehicles and smaller industrial sites, make capture and storage impractical. Thus no one talks of 'clean oil' or 'clean gas'.

In practice capturing all the coal sourced CO2 in NSW is technically impossible and the cost rises very rapidly with the percentage actually captured.  But if only a few percent is captured, for example from appropriately placed electricity generation, it will do little or nothing towards mitigating climate impacts and would certainly make electricity generation a lot more expensive.  These costs would be handed on to electricity consumers and industry.  Unless paid for by all CO2 producers and matched overseas, the inequitable impact of such technology has potential to seriously damage overall economic productivity.

Safety and the environment

Of additional and perhaps more significant concern is that burying CO2 may be very dangerous. If a large pocket of gas escaped, for example during an earthquake or future drilling or major earthworks it could kill every human and animal for miles around.  This has already happened as 'an act of God' on several occasions.  Most recently in 1986, at Lake Nyos in Cameroon when a sudden CO2 'belch' from the lake killed nearly 2,000 people; and all the animals in the region.

I have based this case on just 1% of the world's coal sourced CO2.  Globally coal consumption is two orders of magnitude greater and is growing on an exponential basis.

Thus there is no prospect that Clean Coal technology can make a significant difference to world climate impacts from CO2; except to further accelerate resource depletion, impose higher costs through attempted 'pilot schemes' and pose unacceptable environmental and safety risks.

This, together with an analysis of the potential contribution of renewables (read more...) is why I continue to support the nuclear power as an increasing part of our energy mix.

To read about carbon sequestration in more depth click here...

‡ The term chimera has come to describe any mythical animal with parts taken from various animals and, more generally, an impossible or foolish fantasy - Wikipedia.